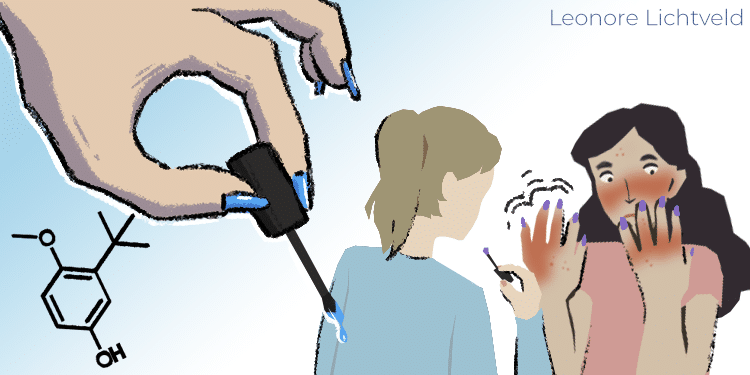 Once you have an allergy, you can also forget oral care... read why...

Recently I had a fascinating and important conversation with Prof. Albert Feilzer, affiliated as material expert at the dental (training) center ACTA in Amsterdam,  about his increasing concerns in respect to acrylate allergy.

Plastics based on acrylates are widely used in nail styling (gel polish, gel nails and artificial nails) and by the dentist for making white fillings and dentures.

Dermatologists internationally have already hit the alarmbutton that a tsunami of acrylate allergy is coming up. Also Professor Feilzer thinks that this is a worrying development.

The breathing problems and skin complaints are irreversible. An allergy to acrylates you cannot undo.  So after you developed an allergy to acrylates, there is no space for gel nails, but also no more crowns, or even a cemented artificial knee. Increasing sensitivity to 2-hydroxyethyl methacrylate (HEMA) develops, which is used in fillings and crowns, and on an even larger scale in gel and artificial nails.

Substances from the petrochemical industry

In his office on the eleventh floor with a beautiful view over Amsterdam-Buitenveldert, he first sketches a more general picture. A doomsday scenario for our health that we owe to the emergence of at least 20 thousand new substances from the petrochemical industry during the great growth in prosperity in the 50s. ‘Our body, as Darwin puts it from his theory of evolution, has not had time to get used to it for thousands of years. It can make us sick,’ says Feilzer.

The relationship between disease and the mouth

He continues: ‘We are surrounded by modern chemicals that are often also toxic or allergenic. From perfume sprays in the toilet to flavor enhancers and much more.

‘As a professor of dental material science (he started his career as a dentist, ed.) I was increasingly confronted with questions from dentists about the relationship of materials in the mouth (such as amalgam) in relation to diseases.

‘This increased because people consulted alternative healers who had a focus on what goes on in the mouth, and the relationship with disease. It has led to an ‘allergy consultation hour’ at ACTA. Dentists and doctors refer their patients to allergy consultation hour when they suspect that the complaints are caused by materials present in the mouth.

‘At the allergy consultation hour, people come with a wide variety of health complaints such as dry mouth, mucosal problems, eczema, fatigue, and so on. Gradually, in collaboration with the Amsterdam UMC, we have been able to improve our tests more and more.  ‘For example, we noticed that many patients with palladium in crowns had many complaints, but that the allergist’s test gave a false negative result. Together we have developed new better test salts. If crowns contain substances for which it has been shown that one is allergic are removed, very often, but not always, the symptoms decrease.   ‘Think about the wire that you get behind your front teeth after orthodontics, which often contains 10-12% nickel and can give cycle-dependent pimples in your face when you are allergic to nickel. As soon as we removed those wires, those pimples didn’t come back. A crown with nickel in your mouth? That can give eczema to hands and feet. A doctor generally does not look into the mouth….. and they are often not aware of this process.  No more white fillings or crowns

‘And so during time, you broaden your view more and more when people come up with problems. In case of plastic allergy, acrylates play the leading role. If you used to be allergic to shellac, in regular nail polish, I was less worried about that. But acrylates in gel nails is another story that has major consequences for a number of medical treatments.

‘Once that allergy is a fact, you will never be able to have white fillings, but also no dentures. Not even a cemented knee prosthesis or an acrylic-based skull roof implant – should that be necessary after an accident.  Think about it! As a young woman you only want to have beautiful nails, but that it can end in a situation where many types of medical treatments are no longer an option.

An acrylate allergy can manifest itself locally in bleeding fissures of the fingers, red fingers or cheeks, eczema symptoms with redness and systemic in asthma-like breathing problems.

Feilzer emphasizes that you can also get this with a dental treatment, but there is a micro-exposure because the dentist works as hygienically as possible and can also use a rubber patch around the tooth to prevent exposure in the surrounding tissue. So becoming allergic to acrylates via a dental treatment is therefore extremely rare.

The liquid is the worst

Albert Feilzer: ‘I am particularly concerned about the large amounts of acrylic that nail stylists use. They exposed themselves to it on a daily basis and their customers weekly or monthly.

‘The main topic is that they work with liquid that is applied directly to the nail and often also reaches the surrounding tissues. In addition, acetone is used to soften the gel on the nail during removal. This releases a lot of ‘residual monomer’, which can cause an allergy via the skin.

Feilzer also sees a relationship between dentists and the nail industry, because more and more women are becoming dentists (it is estimated that in the near future 70% will be women) and they also wear gel nails in large numbers. If a dentist has become allergic to acrylates, he/she has actually become incapable for work. That’s a huge threat ……

Gloves do not protect
In order to be able to learn more about this problem, Albert Feilzer became a member of the private Facebook group for ‘nail technicians’ and learned that it was not easy to create awareness to this profession about health risks.

They think that if you have become allergic, you can easily switch to another brand. However, there is only one solution for the problem: stop using gel and sticky nails.

Feilzer: ‘Also the advice they gave each other is misleading. For example, wearing gloves. That hardly makes sense! Gloves are waterproof but not against plastics. The plastic material goes through it and your hands sweat in those gloves. So it softens the skin and makes the water-loving plastic fabric easily to penetrate.

‘Ultimately, it leads to the fact that you can become allergic even faster.’

To my question how many people are now walking around with an acrylic allergy, he cannot directly answer. But he knows that it happens regularly among dentists, and that they really have to stop their work.  ‘My estimation is that 1-2 out of 1000 has become allergic. That’s quite a bit when you know that we have ten thousand dentists in the Netherlands. ‘

The biggest exposure gets the customer in the nail salon

‘We now advise dentists in training to change gloves immediately as soon as they are contaminated with plastic. That should also be the urgent advice to nail stylists. But the customers ….. they sometimes sit in the nail salon with their fingers wrapped in foil to soften the nail gel with acetone. For them, the exposure is inevitable!’

Once it was three a year, now it’s 1 per week

Albert Feilzer was used to see a patient with a plastic allergy two to three times a year and now it’s really every week. They are sent by the dentist or dermatologist because they get acute complaints as soon as a filling is made in the mouth. Half of these patients wear or wore gel or artificial nails.

When I look for articles about acrylic allergy and gel or artificial nails, I notice that some advice is keep coming back: you have to be careful with damaged cuticles and make sure that the gel polish must be well dried and hardened. Feilzer looks at me shaking his head and says, ‘That paint has never really hardened properly. There are always residues of monomer in it, and that leaks out.’

The message that gel nails are ‘healthier’ than artificial nails is also based on inaccuracy. ‘Gel nails are even worse because of the thick layer of plastic used for gel nails.’

When I ask if there is no hypoallergenic material, the answers is negative. ‘It would be great of course but I once spoke to a director of a factory in nail polish materials. He told me that he couldn’t even walk into his own packaging department without having an asthma attack. If you have the symptoms, you really have to stop using these materials immediately. There’s nothing else on it and no escape.

After flu suddenly allergy …. how does that work?

Is there a trigger for the manifestation of this allergy? Feilzer tells me that it can go well for years, and then your immune system is suddenly heavily burdened. For example by a big flu and the chance increases that an exposure to allergenic materials ends up in a real allergy.

‘And I see that much more often: after an overwhelming or continuous stimulation of the immune system, all kinds of complaints can arise that you did not have before. Whether it’s nickel in crowns, gel nails, silicone breast implants or maybe even a Covid vaccination? …. we still do not know a lot in this area and a lot of research has to be done to get more insights.’

This article is copyright protected.